Get Your Grammar Fix(ed): What Kind of Mood Are You In, Verb?

Today, we're going to focus on the many moods of a verb. 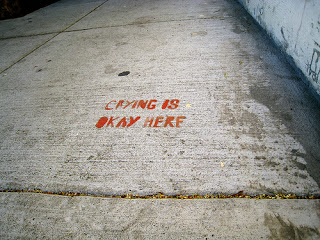 No, I don't mean that verbs wake up cranky or get all huffy when someone criticizes them. The moods of a verb are MUCH easier to deal with than the moods of a woman.

(Men, no snarky comments. I know whereof I speak...I am woman. Plus, you don't know my current mood since I'm behind the screen. Just tread respectfully, is all I'm sayin'.)

Every verb has four attributes: person, number, voice, and mood.

There are two easy-peasy moods: indicative and imperative.

Indicative: most sentences fall under this heading. These babies deal with the facts.

Memory trick: A defendant cannot be indicted without facts.

Declarative: I am so weak, I need to sit down.
Interrogative: How tired are you?
Exclamatory: It's awful! My muscles are trembling!

Imperative: a parent's best friend. These are commands, be they stern or polite. Memory trick: It is imperative that you follow these directions.

Go back to bed!
Please don't interrupt.
Let go of my legs.

It's the subjunctive that gets under people's skin. The subjunctive mood is saved for hypothetical situations, what ifs, and wishes.

It's the mood of possibility.

If I could erase that conversation, I would.
Would you like a cup of tea?
He might win the contest.

Often in English, as above, the subjunctive mood requires the "possible" helping verbs: would, could, should, may, might. In other languages, it's easier to spot the subjunctive, because the entire verb looks different, and we include the helping verb when we translate.

It might look like it doesn't matter in English, but it does. Though the verb doesn't appear to change, the mood does. We need to know when and why it happens in order to use the moods correctly.

Some sentences use both the subjunctive and another mood. Let's pull that sentence out of the paragraph above and inspect it.

The second clause is indicative--stating a fact. ...but it does.

If you want to go outside (subjunctive), get your work done (imperative).

Now, for the tricksy question: What about first person, past tense? When is it correct to say, "If I was," and when should we say "If I were"?

Use "if I was" when you are talking about a factual situation.

If I was disruptive when I got up to leave early, I'm sorry.

Use "if I were" when you're using your imagination.

If I were in a quiet cabin in the mountains, I would get more writing done.

It's as simple as that.

Now, if I were (subjunctive) to tell you that A.J. Hawke won (indicative) the gift card for last week's creative sentences in the active and passive voice, who would offer (subjunctive) congratulations?

Your stream-of-thought sentences made us laugh. Contact us at alittleredinc@gmail.com to claim your prize (imperative)!

This week, head down to the comments and practice "If I was..." and "If I were..."! Thanks for swinging by.

Thanks to sethoscope for the image.

Labels: get your grammar fix(ed), if I was vs. if I were, imperative, indicative, subjunctive, verb moods